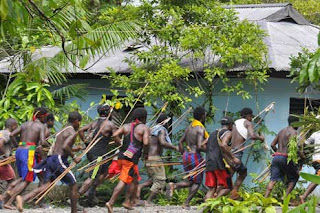 ☆ Marciano Norman: Ending the code of silence at spy agency

Newly appointed National Intelligence Agency (BIN) chief Lt. Gen. Marciano Norman is no typical Army general with a penchant for secrecy who blindly complies with strict military rules.
Less than three months after taking over the position, Marciano is taking the agency on a new journey that up until now was taboo within the intelligence community: ending the code of silence in intelligence work.

Marciano, born in Banjarmasin, South Kalimantan, on Oct. 20, 1956, is considering setting up a public relations unit with an appointed spokesperson for the public to interact with, and reopening BIN’s website, www.bin.go.id, to receive public input and distribute information.

He will even welcome journalists for a rare tour inside the sacred BIN headquarters in Pejaten Timur, South Jakarta, and hold regular meetings with leaders of prominent media outlets.

“It is time to end the years of doing intelligence work in absolute silence,” he said recently.

“We want to change the impression of BIN as a dark, scary and unfriendly agency so that the public feels comfortable with what we’re doing,” said the father of four.

Marciano’s strategy to reach out to the public is actually a rerun of a similar policy applied by former BIN chief Lt. Gen. (ret.) Hendropriyono between 2001 and 2004, a period peppered with leaked BIN documents.

Analysts at the time believed the leaks were a counterintelligence strategy, with the media as the battlefield.

But Hendropriyono’s period of openness was tarnished with the poisoning death of human rights activist Munir in mid-2004, some say at the hands of BIN agents, aboard a Garuda Indonesia flight en route to Amsterdam.

BIN resumed its iron-clad tactics during the period of Lt. Gen. (ret.) Syamsir Siregar (2004-2009) and police general (ret.) Sutanto (2009-2011), during which BIN shut down its public relations unit and website, and rarely engaged with the media due to concerns of security breaches.

Marciano’s awareness of the mass media’s influence could be tempered by concerns that the military (TNI) may return to dominate BIN, which is by law a civilian institution.

The TNI, according to critics, largely has an allergy to human rights issues and freedom of speech. It was not until the Sutanto period that many of BIN’s civilian career officers secured top posts at the agency.

“The dichotomy between the military and civilian is no longer an issue. Whoever is capable gets the job,” said Marciano.

Unlike Sutanto and Syamsir, Marciano speaks bluntly, and has an easygoing and enthusiastic manner that many hope will change BIN’s perceived sinister image of being a place packed with assassins, like in the days of former dictator Soeharto, whose rule ended in chaos in mid-1998.

But Marciano is known to have a limited intelligence background, spending most of his career in the cavalry and as an officer at the Jakarta Military Command.

Marciano’s career got a boost after he was appointed commander of the Presidential Security Unit between 2008 and 2010.

The job is not an unfamiliar one for Marciano, whose late father, Lt. Gen. Norman Sasono, held the same post of commanding Jakarta military personnel between 1977 and 1982.

Norman Sasono was a legendary general and Cold War hero after his success in uncovering a network of Soviet spies operating in Jakarta in 1982.

Presumably wanting to emulate his father, Marciano has put netting foreign spies on the top of his list of priorities in his counterintelligence efforts.

“The operation of foreign spies is also of concern. It’s on my list,” he said.

Marciano also has a number of plans to boost BIN’s performance after the enactment of the Intelligence Law in October that for the first time grants a legal foundation upon which the intelligence community can operate.

“One thing is for sure, the quality of our agents is still poor by my standards. There’ll be an overhaul to upgrade their capacities,” he said.

BIN employs around 1,800 agents scattered across the archipelago and in more than 17 countries, with this year’s operation budget set at Rp 1.2 trillion (US$133 million).

Marciano’s other priority is to strengthen BIN’s newly established economic intelligence division, which was set up by Sutanto early this year as part of the agency’s reorganization.

The new division is in the process of training more agents to equip them with in-depth knowledge of business and economic issues.

“My ambition is to have agents with the capabilities of economists who can help anticipate and provide an early warning of a potential economic crisis,” he said.