One of the five ‘Herks’ for Indonesia proved to have a corroded CWB that needed replacement, prompting IDS to turn to some design work that NG Technology Services had done in the U.S. when the U.S. Air Force was planning to retain C-130Hs. A new CWB was built at NG’s Lake Charles, Louisiana facility (where the company does heavy checks on the Air Force E-8 and KC-10 fleets). It was shipped to Australia, where IDS is now completing overhaul of the fifth C-130H for Indonesia.

Jim Sutton, director global relations for NG’s Technology Services, told AIN that there was lots of interest in the new capability. There are various reasons why CWBs on legacy C-130s might need replacing, ranging from corrosion to fluid leaks to hard landings, he said. The mod uses approved Lockheed Martin or certified materials, and is “an affordable and innovative solution” according to NG. Boeing Defense, Space & Security is bullish about prospects for military rotorcraft sales in the Asia-Pacific region, with Indonesia emerging as a potential buyer for the CH-47 Chinook. 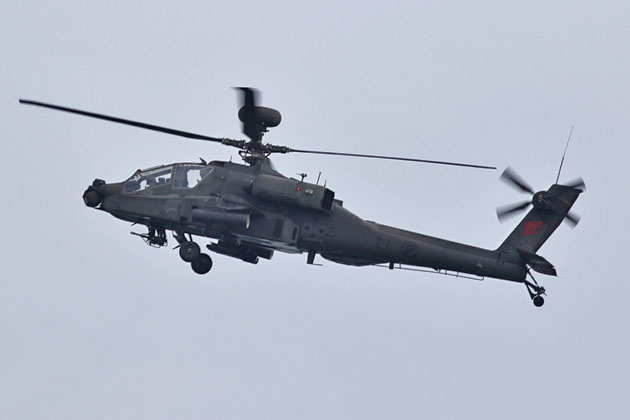 Boeing officials met with representatives from Indonesia on 16 February, and Shephard understands Jakarta has asked the US for a letter of offer. However, the exact number and requirements are not yet delineated.

Boeing will continue producing Chinooks until at least the mid-2020s.

Referring to the suitability of Boeing’s military portfolio to Asia-Pacific, Jeff Kohler, vice president global sales, told media ahead of the show, ‘We see a very viable market for us here going forward.’

Other potential sales are ‘a few more’ Ospreys for the Japan Ground Self-Defence Force (JGSDF), in addition to the 17 it already wants, according to Kohler. A foreign military sale (FMS) was notified to the US Congress last May.

Japan is buying a configuration similar to the MV-22B of the US Marine Corps, although they will have a different radio fit. The US Osprey fleet has now surpassed 300,000 flight hours.

Realistically, however, the Osprey’s price tag is an obstacle for most nations in the region, with Kohler admitting this made it a ‘longer trek’. The US Navy’s selection of the Osprey for its carrier onboard delivery (COD) system could open the door to more applications.

Indeed, Rick Lemaster, director of international sales and marketing for vertical lift, mentioned three main areas being pursued for Osprey sales. One is nations operating aircraft carriers who might need a COD.

Another is buyers of the Lockheed Martin F-35 fighter, since the Osprey can internally carry an F-135 engine module. The third potential market is countries with significant land masses or large numbers of islands where rapid mobility may be required.

Without naming countries, Kohler said a couple of Asia-Pacific countries had expressed interest in the AH-6i platform.

Figuratively speaking, South Korea is ‘flying the wings off’ its Boeing 737 airborne early warning and control (AEW&C) aircraft through intensive use, and Kohler said the country could opt for two more examples.

India may invest in further P-8I maritime patrol aircraft too, while the first AH-64E Apaches are on schedule for delivery to India in 2019.

Bell Helicopter and BAE Systems Australia signed an agreement on 16 February to sustain the AH-1Z Viper attack helicopter, in preparation for a possible replacement of the Australian Army’s Airbus Helicopters Tiger.

However, Lemaster said Boeing is not currently offering its Apache to the Australian Army and is waiting for release of the Defence White Paper

Indonesia has indefinitely suspended a stealth trimaran programme known as the Klewang class.

Halt may signal a shift in acquisition priorities for the new navy chief who assumed command in December 2014.

The Indonesian Navy (Tentara Nasional Indonesia - Angkatan Laut, or TNI-AL) has suspended the 63m stealth fast attack craft programme known as the Klewang class and will not be making further acquisitions beyond the single vessel that is currently under construction.

Vice-president and head of Saab Indonesia, Peter Carlqvist, told IHS Jane's at the 2016 Singapore Airshow that the company's weapons and systems will now also not be fitted onboard the vessel that is under construction at Indonesian shipbuilder PT Lundin's premises in Banyuwangi, East Java.

Saab previously said the Klewang-class vessels would be equipped with the company's suite of combat systems including a four-console 9LV Mk 4 combat management system, a Sea Giraffe 1X surveillance radar, the SME-150 radar electronic support measures (ESM) and the CEROS 200 fire-control director. The vessel was also to have been armed with a BAE Systems Bofors 40mm Mk 4 gun concealed in a stealthy cupola and four Saab RBS 15 Mk 3 anti-ship missiles.

"Saab will continue to promote the trimaran concept with our combat systems with other customers and we remain open to producing the platform with other shipbuilders in other countries", said Carlqvist who added that the concept has received strong indications of interest in other parts of the world. "We have even been called in by the United States' Littoral Operations Center [an institute of the United States Naval Postgraduate School] and they have shown strong interest in this trimaran concept so we remain optimistic", he said.

Two members of an armed criminal group in Aceh province gave themselves up to the police after remaining on the wanted list for several years.

"They surrendered of their own will. They felt they had better surrender rather than have the police continuously on their heels," Chief of the Aceh Provincial Police, Inspector General M Husein Hamidi, said here on Friday.

The two members of the armed criminal group were identified as Raja Rimba and Samsul alias Taun.

They surrendered before the East Aceh district police on Tuesday (February 16) and handed over an AK56 rifle with magazines and 10 bullets and an FN gun with 37 bullets and a uniform.

"The criminal offense they ever committed was the abduction of a foreigner working for an oil mining company in East Aceh some time ago. They released the victim a few days after abducting him," he said.

The members of the armed criminal group claimed that they were not former combatants, and had rather formed an armed group for making money, he said.

The police are still studying whether the Raja Rimba armed group was linked to the Din Minimi armed group whose members surrendered to the head of the State Intelligence Board (BIN) some time ago.(*) 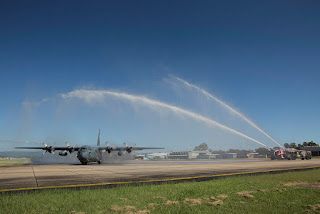 C-130H Hercules A-1334 taxies under a water arch after being handed over from the Royal Australia Air Force to Tentara Nasional Indonesia-Angkatan Udara at a ceremony at RAAF Base Richmond. (RAAF) ★

C-130H Hercules A-1334 transport aircraft sold to the Indonesian Air Force (TNI-AU) has completed maintenance and modification work at RAAF Base Richmond.

The RAAF retired the last of its 12 C-130Hs in November 2012, and offered four of these aircraft for transfer to the TNI-AU. Another five C-130Hs, along with simulator and spare parts, are being sold to the TNI-AU at a discounted rate. These C-130Hs will further enhance Indonesia’s capacity to respond to natural disasters and humanitarian crisis. 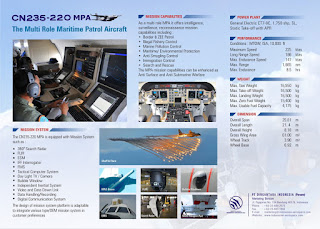 Indonesian state-owned aircraft manufacturer PT Dirgantara has confirmed that it will be submitting a bid for the Philippine Department of National Defense's (DND's) second attempt to procure two maritime patrol aircraft (MPA) platforms.

The DND previously tried to acquire two MPAs for the Philippine Air Force (PAF) under a PHP5.97 billion (USD125 million) programme known as the Long-Range Patrol Aircraft (LRPA) acquisition project in 2014. However, the bidding process ended towards the middle of the year after contenders failed to meet technical and documentary requirements stipulated by the Philippine government.

Offering its CN235-220 MPA, PT Dirgantara was one of eight companies that submitted a bid in 2014.

A view of Kongsberg's simulator for the Indonesian Navy. [courtesy of Kongsberg Maritime AS] ★

Kongsberg Maritime has delivered and installed a suite of new bridge simulators for Indonesia's Ministry of Transportation.

The Ministry's Maritime Training Centre will use the new simulators to assess the Indonesian seafarer's operational readiness to be deployed for local and international operations.

The new simulators will support the Ministry of Transportation in reducing the time taken and the tools required to assess Indonesian seafarers.

Kongsberg had won the contract to supply its K-Sim Polaris simulator to the Indonesian Navy by means of a competitive tender.

The simulator will feature 26 bridges and eight instructor stations integrated into the same unit and will be equipped with set of real instruments for merchant marine and navy application.

Additionally, the company will develop new simulator models and exercise areas as part of its delivery.

Kongsberg Maritime area sales manager Asraf Ibrahim said: "The contract reflects the growing importance of having a realistic simulated vessel navigation and communications environment to support the quality of assessment.

"Ultimately, our simulators can reduce operational costs for the training and assessment organisation, and the shipowners, while improving maritime safety and efficiency by supporting seafarers to work with more knowledge and proficiency."

In July 2014, Kongsberg Maritime had been contracted by UiT, The Arctic University of Norway, to deliver significant upgrades and extensions to the bridge simulators of its existing ship.

The Indonesian government has ordered a prototype of the X18 fire support vessel. Vessel will be used to evaluate platform's suitability ahead of a proper acquisition programme

A model of the X18 fire support vessel on display at IndoDefence 2014. [IHS/Ridzwan Rahmat] ★

Swedish defence company Saab will be providing a remote-controlled weapon system and a battle management system for a prototype of the X18 fire support vessel (FSV) being acquired by the Indonesian Ministry of Defence, the company told IHS Jane's on 18 February at the Singapore Airshow 2016.

The X18 FSV, more commonly referred to as the 'tank boat', is an 18 m platform concept that has been developed by Indonesian shipbuilder PT Lundin. A model of the platform was unveiled at the IndoDefence 2014 exhibition in Jakarta.

"The prototype will be collaboration among Indonesian defence industries and some foreign suppliers", said Peter Carlqvist, Saab's vice-president and head of the company's Indonesia office. "Saab will be supplying the Trackfire remote weapon station and a variant of our company's battle system", he said, adding that the product will be similar to the company's 9LV combat management system.

Although a contract for the prototype has not been formalised, the Ministry of Defence has given approval for the vessel's construction to commence. "We should expect a formal contract very soon", said Carlqvist who added that the completed prototype is scheduled to be tested in about 24 months' time.